Welcome to the online archive of the history of Derby, Kansas. Here you will find photos, newspaper articles, videos, etc.


After the end of the Civil War, the area of land now known as Derby was opened up for settlement. In spring of 1869, Alexander and Margaret Garrett became the first of many settlers to put down roots in the area of Spring Creek.  The town of El Paso was established in July 1871 when John Hufbauer and J. Hout Minnich each decided to give close to 40 acres of land for the creation of a town. A majority of the settlers were farmers but early businesses in the area included a grain dealer, hotel, feed stable, post office, blacksmith, dry goods and grocer, and a doctor.

The name of the train depot was changed by the Santa Fe railroad from El Paso to Derby in the 1880s when the mail for El Paso, Kansas and El Paso, Texas kept getting mixed up. This was an unofficial change as the town was still listed as El Paso in the county records. When the town was incorporated as a third class city in June 1903, the petition had to be filed under El Paso and not Derby. The name was not officially changed until August 1956 after a petition of 978 legal voters was submitted to the county.

Since most structures still standing today date back only a few decades, the planning of Derby’s sesquicentennial celebration in 2019...

The Derby Saddle Club in the 1940s. Myron Schwartz, is second to the left of the banner, mounted with a tilted hat.

Paul and Nona Schweitzer's children and grandchildren
circa 1944 or 1945

The children and grandchildren of Paul and Nona (Goodacre) Schweitzer at Linwood Park in Wichita, KS with Nona Schweitzer in 1944 or 1945. 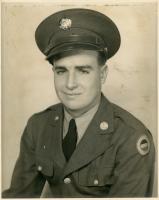