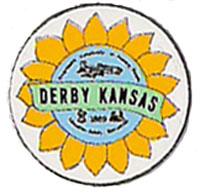 Derby has come a long way since the Garrett family settled on the bank of Spring Creek in the spring of 1869. Changing its name from El Paso to Derby, becoming an incorporated city, and establishing a city government were just a few major events.

Since most structures still standing today date back only a few decades, the planning of Derby’s sesquicentennial celebration in 2019 prompted discussions about how to best tell Derby’s story.

Derby, or El Paso as it started out, was quite lucky that the community had a doctor quite early in its history. In fact, Derby had a town doctor contiuously, except for a brief period in the 1930s and 1940s. Different stories have come about while researching; from a doctor swimming across the river to provide medicial assistance to the town having a one-armed doctor.

The Garrett family came to the area in the early spring of 1869 and was soon followed by others coming to homestead the land. The town of El Paso was formally founded by J. Hout Minnich and John Hufbauer when they filed a plat on July 11, 1871. The two neighbors each committed 40 acres of their own land to dedicate to the creation of the town. Several families stayed in area for many generations.

Farming Equipment Through the Years